Ophelia lives in a small town, the primary selling point of which is that it’s located on the way to bigger, better places. When the larger than life Impresario comes to town with his dark and mystical traveling show, she flirts with the idea of reconciling the life she is expected to live with the dangerously alluring alternative reality that haunts as much as it defines the Impresario’s magical world.

The idea for this story was planted as my fiancee and I worked on our Halloween costumes a few years back, a marionette and her puppeteer (seen below). Halloween is a special time of year for me and my betrothed. After all, it was on that holiday ten years ago that I professed my intentions to court her until she felt adequately wooed and was prepared to settle down into a romantic partnership. Sadly, after writing half of the first draft, I neglected the idea until I couldn’t relate to the concept anymore. For a while, I was so weighed down by the humdrum cacophony of surviving life that living seemed more mechanical and drained of all its whimsy. 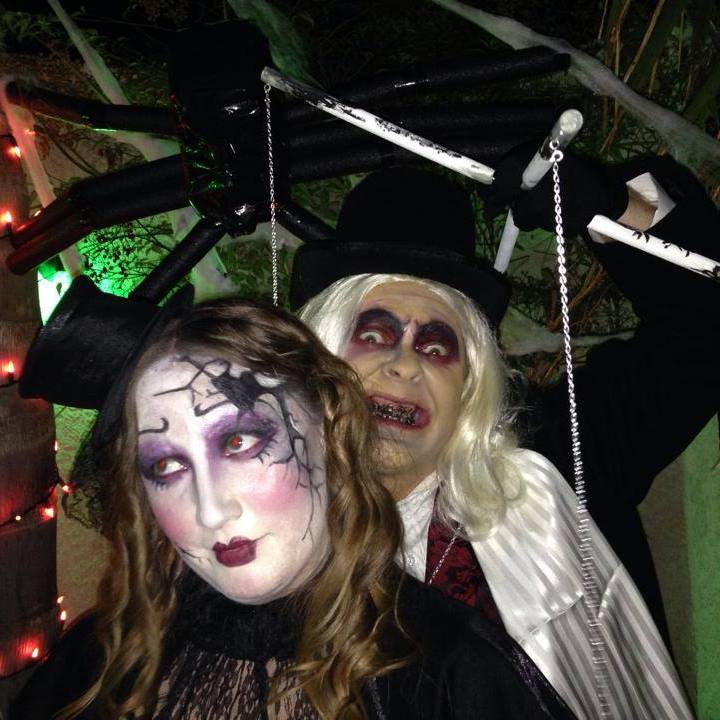 Flash forward to a few years later and I was falling apart, diagnosed with Post Traumatic Stress Disorder and trying to leverage my passion for restoring my broken dreams of being a writer as a means of making myself a man worthy of the unconditional love and support that my family and friends had been showering me with through this difficult time. I picked up several half chewed tales, but it wasn’t until I reread the start of this one that I fell in love with writing again and in turn, I remembered what I used to love about life. I felt reconnected to a time when romance and magic were a real thing, not just an abstract notion.

I’ve included the first five chapters of the book, but I’ve only got three chapters left to revise before I’m ready to hand it over to an editor. Unfortunately, chapter one is among the three that I’m not fully satisfied with but once I decided to enter this contest it became clear that I needed to take a leap of faith and go for it. Suddenly the small amount of work that I have left to do seems minuscule in the face of what lies afterwards and standing on the precipice of what’s next has become more exciting again, less daunting.

Hopefully you enjoy this story, your feedback is welcome, your readership is treasured and your pre-order means more to me than you can ever know. Even if you’ve just made it this far through the bio, I appreciate that you’ve given me the opportunity to convince you that my dream is worth your time. Thank you.